In the August employment report, the BLS reported In August, employment in federal government increased by 28,000. The gain was mostly due to the hiring of 25,000 temporary workers to prepare for the 2020 Census.emphasis addedEarlier, on August 12th, from the Census Bureau: U.S. Census Bureau Announces the Start of…

The uber-popular K-pop band @BTS_twt accounts for $4.65 billion of South Korea's GDP — making the band as valuable to the country's economy as Samsung and Hyundaihttps://t.co/uLIq4WLZc5

NEW: Mike Pence's national security adviser was on the July 25 Trump-Zelensky phone call that is now at the heart of House Democrats' impeachment inquiry, the Washington Post reports https://t.co/5s1SfMLTfH

Pence is the whistleblower!

Which reminds me. Who wrote that NY Times op-Ed of a year ago.

Now that would be a very interesting news item.

In his victim impact statement, Botham’s brother Brandt offered forgiveness, citing his Christian faith. He then asked if he could hug Guyger.

In a surprising moment, the judge agreed and the two embraced, as sobs rang out in the room. https://t.co/K1O0rUlKqi pic.twitter.com/e4j5Kp43E8

A tragedy, all around. I guess I don’t understand why she was convicted of murder instead of manslaughter or negligent homicide. Did the prosecutor prove motive?

I’m not religious, but I think the man is in a State of Grace.

His slain brother graduated from Abilene Christian (my alma mater). I would not have that level of grace, myself, but then I’m a heathen.
I could see my father or grandfather doing that, however.

That was my thought. That is grace.

🎶. If you like subpoena coladas / and getting caught in Ukraine 🎶

News will be interesting here as well.
Crazy times.

The insanity is reaching a fever pitch. The wingularity is near!

When I see my neighbors with guns I’ll let you know. Az should be one of the first places to lose their minds completely.

Oh, this part of Florida is gonna be a treat.

The youngest was 7 or 8 when the Witnesses came to door in Houston, and since I was feeling feisty, I quoted scripture against their rather WatchTower tract-based interpretation of the “End Times.” I do wonder if they had ever read the whole New Testament. After 10 minutes, the ladies got so pissed they shook their feet off at the doorstep and we never saw them again.
The youngest still remembers that and chuckles.
(I’ve told this before. Sorry.)

What part of Murica is that?

I just listened to that Trump presser.

Jeez, imagine being married to that guy.

I’ll move on him like a bitch. When you’re sane and they’re completely nuts they let you do whatever you want. I’ll grab that pussy-ass-bitch.

It was your idea …

i’m thinking about rolling my SDRL winnings into TSLA now that the WeWork IPO is cancelled.

Ursa measures tank levels from space using Synthetic Aperture Radar (SAR) satellites. The data is then processed with a machine learning algorithm. The company also reports on flaring activity. These two pieces of information can provide a picture of Saudi Aramco’s activities.

Geoff explained that three sites — Ras Tanura, Yanbu and Khafji — contain most of Saudi Arabia’s domestic crude oil inventories. In the month prior to the attack, inventories were relatively stable. But the two weeks following the attacks saw inventories at these three sites fall by more than 20 percent.

My favorite bible story is the one where Jesus warns the countrymen that there will never cease to be poor people in the land, so they should build a wall to keep them out & open fire on their kneecaps to stop them from tanking the goat hut values.

The Trump administration still has not estimated the cost of the collections or a timeline to either partial or full implementation, the DHS official said Wednesday. The cost of collecting DNA from most or all immigrants detained at U.S. borders would include both the expense of testing and the manpower required to gather the samples.
https://www.politico.com/news/2019/10/02/migrant-dna-collectiont-trump-administration-021390

Who had “moat filled with snakes and alligators” on their Bingo card?

Trump seems to be losing it just a little bit lately. 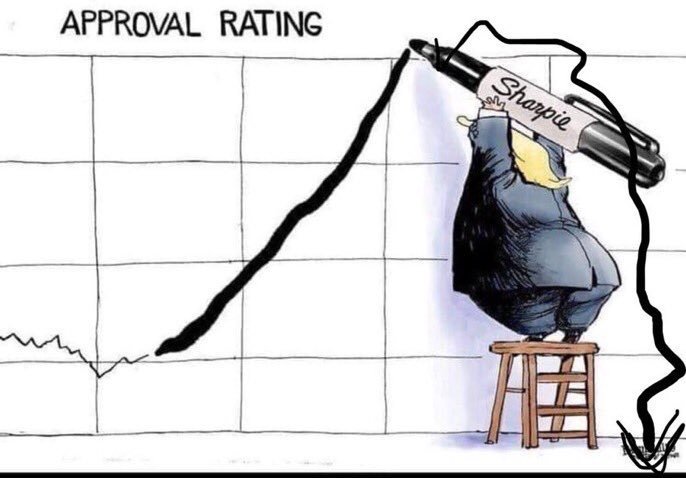 By @FridaGhitis, CNN: "Raskin says there are Trump Hotel envelopes in the packet of disinformation and conspiracy theories [the IG brought to Congress]—which [packet] is of 'mysterious provenance.' There may be misconduct by Pompeo. The packet may have come from the White House." pic.twitter.com/jBPLhWPZ02

The GOP only cares about power. Lie cheat and steal to keep it. No matter what gets trampled or lost along the way.

Trump administration pressure on China’s access to U.S. capital markets is likely to intensify, according to several analysts https://t.co/wUNtcsCWYe

Read the DNI guidelines on whistleblowers and you'll realize this NYT story is a *non-story*. The whistleblower acted appropriately, and so did Schiff in not leaking the vague info he had—*and* in pushing to make the information public. Don't let this news distract you. pic.twitter.com/6Tux5Y174r

You bet it’s political – the GOP made it political by backing criminals at every turn. Only one-side cares about the rule of law.

Natty, would that be the Green Party?

No, the Democratic party. They have opened an impeachment investigation into the crimes of this administration. The Trump admin has been trying to interfere in the 2020 election asking Ukraine to fabricate disinformation by threatening to withhold US support.

“Following the law is not a political game” nothing more needs to be said.

You seem a little upset that Trump ratted himself out, Tom.

both parties of this plutocratic duopoly are drenched in blood.

i hope that at some point this nation begins to atone for its history of brutal war and genocide. and if it does not, i hope the rest of the world begins to demand accountability, one way or another.

The Democrats also supported slavery – don’t ever forget that.

I can’t do anything about the past, all we have is now.

*TRUMP KNOWS THIS IS A NONSTORY*

NYT: "The aide—following committee procedures—suggested the officer find a lawyer and meet with an IG. The aide DIDN'T SHARE THE WHISTLEBLOWER'S IDENTITY with Schiff."

Just read a profile of Steve Linick, the State Department Inspector General – very good, the guy takes the job seriously and was a Bush II Justice department official, plus other stuff – been asking hard questions for years now.

The link follows, and it is WaPo (cue BG)

My impression is that only congressional staff will be present. If so, that makes leaks less likely, at least accidental ones.

The shortest English word that contains the letters A, B, C, D, E, and F is "feedback."
Joe's